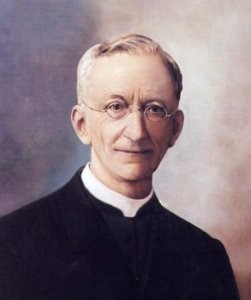 Father Leo Dehon was born on the 14th March 1843 at La Capelle, in the diocese of Soissons, in France. In later years he reflected with pleasure that he was baptized on the following 24the March, the eve of the Annunciation. He was to write: “in this way my Baptism united me with the ‘Ecce Venio’ of Our Lord”. He would say to his spiritual sons, the Priests of the Sacred Heart; “In the Ecce Venio and the Ecce Ancilla is to be found our whole vocation and our whole mission”. The Sacred Heart of Jesus and the Immaculate Heart of Mary would be light and strength for him throughout his long life. His tender and filial devotion to Our Lady led him to an ardent contemplation of the Heart of the Savior pierced on the cross.

From his well-respected and distinguished family the young Leo would develop a noble and gentlemanly spirit, rich in humanity and open to deep friendships with all kinds of people in the Church and in civil society his whole life long. He was particularly thankful to God for his mother who “began in me the love of the Sacred Heart”.

While still at high school, he was blessed with excellent priests who, as teachers and spiritual guides, helped him to understand the first stirrings of a priestly vocation around Christmas of 1865. However his father, who had dreamed of a brilliant career for his son tried to frustrate his calling to the priesthood by sending Leo off to the Sorbonne in Paris. Here at the age of 21 he obtained the degree of doctor of civil law. Throughout this period of study Leo attended the Church of San Sulpice where “there reigned a truly sacerdotal spirit which continued to inspire me towards the priesthood”. Now his father, almost wanting to put him off his vocation completely, offered his son a long trip around the Orient. Leo was delighted to be able to walk in the homeland of Jesus. But on the return leg of his journey, notwithstanding the objections of his family, he stopped in Rome where, with the blessing of Pope Pius IX he entered the French seminary of Saint Claire in October 1865. “I was finally in my true element, I was happy!”. The pope, in whom Leo recognized “goodness united with holiness”, had confirmed Leo’s vocation.

On the day of his priestly ordination, 19 December 1868 in the basilica of Saint John Lateran, Leo’s joy in the sacrament of ordination was redoubled by the return of his father to the practice of the faith. After having the powerful experience of the worldwide Church when Leo was a stenographer for the first Vatican Council, he returned to his home diocese of Soissons and, in obedience to his local bishop, became the most junior curate in Saint Quentin. With four degrees behind him (Civil and Canon law, Philosophy and Theology) and with a solid grounding through experience in Spirituality and Church life, he was able to give himself totally in many pastoral and social initiatives. He took part in the very first congresses for workers and founded a catholic newspaper. He gave life and vigor to the Institute of Saint John through welcoming and forming young people and eventually he founded the College of Saint John.

When the Sister Servants of the sacred Heart arrived in the diocese, Father Dehon was appointed by the bishop, as their spiritual director and confessor. He wrote: “This providential circumstance provided me with orientation for all the rest of my life”. This was true because, by this time, despite his frenetic pastoral activity, the now Canon Dehon was feeling drawn towards the religious life. The spirituality of love and devotion to the Sacred Heart which was the guiding principle of the Sister Servants was waiting to be lived out by a congregation of priests.

When Leo was on a visit to Rome with his bishop, they stopped off at the shrine of Loreto. This place, which was just a pause in their journey, would be a fundamental source of inspiration to Leo in the foundation of the new group. Later he would write “It was here that the Congregation was born in 1877”. In that little house where the Ecce Venio and the Ecce Ancilla were realised in the Incarnation of Jesus, Father Dehon understood clearly what the spiritual kernel and the dynamic force of the Congregation would be.

On the 28 June 1878 the feast of the Sacred Heart, in the chapel of the college of Saint John, Canon Leo Dehon makes his vows as the first of the Oblates of the Sacred Heart and to these vows, he adds a vow of victimhood in love and reparation. Because of this he wanted to be called by a new name, Father John of the Sacred Heart. It was with this title that he would eventually be presented by the postulator of his cause for Beatification. The early days of the Congregation were marked by great activity for Father Dehon, they were days which saw a flowering of vocations but also many trials, misunderstandings and sad ordeals which would lead to the suppression of the young foundation. On the 3 December 1883 came the ‘consumatum est’, the decree which ordered that the Oblates be disbanded. Father Dehon felt that he had been “Destroyed and torn to shreds” but even in this great suffering he was able to offer up a remarkable act of submission to God and to the Church. This trial was to be the dawn of the resurrection of a new institute with the name “Priests of the Sacred Heart”. At its re-birth the group would take on a new vigor towards foreign mission work, the social apostolate, preaching local missions, and evangelisation. On 25 February 1888 the new group received from the Pope the ‘Decretum Ladies and Father Dehon went to Rome to thank Pope Leo XIII in person. It was at this time that the pope asked Leo to preach his encyclicals, to support local clergy through prayer and collaboration, to encourage houses of adoration, and to encourage people to work in the foreign missions. Father Dehon noted with great joy “This is the mission which the Holy Father has entrusted to us”.

But even at this time Fr. Dehon was having to walk the way of the cross. There were accusations made against him, calumnies about his behavior, troubles regarding the relationship with the diocese, and opposition from within the Congregation. Everything seemed lost, there was a sense of shame. It was when Fr. Dehon made the spiritual exercises of St Ignatius that he recovered his serenity, so that he could renew the pact of love he had made: “I give myself completely to Our Lord to serve him in all things and to do his will in all things. I am ready, with the help of his grace to do and to endure whatever he wills. Later, reflecting on the often painful events of his life, he wrote: “Our Lord has accepted my act of oblation. He wanted to make his work into a great building – for this the foundations had to be dug so deeply”. Father Dehon knew how to embrace the cross with faith in a spirit of love and reparation – he understood that this would produce rich fruit, – and so it proved to be. Soon the Congregation grew strong and began to expand greatly. Father Dehon was sustained in his work by the support of various popes (Leo XIII, St. Pius X, Benedict XV, and Pius XI) all of whom he served with hard work and devotion. Throughout his life he continued to write (The magazine ‘The Reign of the Sacred Heart in souls and in Societies has been running since 1889), to give conferences (he gave a series of very well loved conferences in Milan and Rome), he took part in congresses on social matters, and he continued to found new houses of the Congregation throughout the world. In the last few pages of his diary, Father Dehon wrote: “In my youthful idealism I made a tearful vow, I wished to be a missionary and a martyr. It seems to me now that this has been realized. I am a missionary through more than a hundred missionaries I have sent out; I am a martyr because Our Lord has accepted my vow of victimhood”.

Fr Dehon worked tirelessly, despite his frail-looking frame he was sustained by a faith, which was both genuine and deep, it was “certainty in confidence”. Here was the rock on which he had built his life and his mission. He drew from this faith a constant, truly Christian optimism, which was able to overcome all obstacles, enabled him always to look forward with hope: “he had a radiant faith which, through his preaching and the example of his life, showed clearly his ardent love for the Heart of Christ”.

Love and Reparation, these were his great concern. His religious were given, as a special mission within the Church, reparatory Eucharistic Adoration. Social reparation too was to be made, through working lovingly for justice as a means of creating a “civilization of love”. From his contemplation of the Heart of Christ he drew out what was considered one of the most constant aspects of his personality; a genuine goodness, which people found fascinating and which caused him to be greatly loved. This was particularly so among the young, who often referred to him as the “Très Bon Pere”.
The Servant of God Father Dehon, exemplified a wonderful sense of balance in human virtue. With the grace of God, he transformed mundane reality through his simplicity, apostolic zeal, and mystical asceticism. In this way, he strove for perfection in his priestly and religious vocation and has become a model of priesthood and religious life in modern times.

In the last years of his life, alongside his striving to promote the spirituality of the Sacred Heart and the longing to establish the Reign of God in souls and in society, Father Dehon took on the task of building the great basilica of Christo Re. Father Dehon inaugurated this temple of peace when construction began on 18 May 1920.

Father Dehon’s greeting “Vivat Cor Jesu, per Cor Mariae” indicates that his way through life was also guided by the gentle light of the Blessed Virgin Mary.

Father Dehon died in Brussels on 12 August 1925. Towards the end, he stretched out his hand towards a portrait of the Sacred Heart and exclaimed in a clear voice, “For him I lived, for him I die. He is my everything, my life, my death and my eternity”. To his spiritual sons, the Priests of the Sacred Heart (also known as Dehonians in honor of their founder), and to all those who see in Father Dehon a father and a guide for living out the gospel according to the spirituality of the Sacred Heart, (in other words the whole Dehonian family), he left a written spiritual testament: “I leave you the greatest of all treasures, the Heart of Jesus”.

Father Dehon summed up his greatest aspirations and the mission of the Dehonian family within the Church as “The reign of the Sacred Heart in souls and in societies”. This is what is meant by the kingdom of the civilization of love!
Source from: https://scjphil.org/fr-leo-dehon-2/